It’s almost scary how amazing this game is. Persona 5 really did steal my heart away, coming from someone who actively avoided the series due to terrible experiences with Shin Megami Tensei on the PS2. (I forgot which one, I was like 8 or something). But basically when Masahiro Sakurai confessed his love for this game after the Joker reveal for Super Smash Bros Ultimate, I just had to try it out.

Link to the reveal trailer in question

One issue. I do not have a Playstation 4 or (working) Playstation 3. It also seems that Atlus is deciding to NOT capitalize on the massive marketing allowance Super Smash Bros generates with a Persona 5 port. (Persona Warriors doesn’t count, don’t kid yourself). The only resolve is to basically emulate it.

It’s interesting to see emulation in general and how it progresses…(Also heads up, this is all speculatory except when it’s actual facts. Trust, but verify yo) Playstation emulation has been kind of weird, simply because of the different CPU architectures that the systems end up using per generation. Compare this with Nintendo systems which only the very recent Nintendo Switch moved from the PowerPC architectures This results in a weird scenario where Playstation 3 Emulation is much faster and much more efficient than Playstation 2 Emulation. I have a few theories like perhaps the PS3’s cell processor and it’s reliance of multi-threading for it’s games scales well with the new era of computers compared to the PS2’s Emotion Engine single-threaded processor.

Also the Cell processor itself has been used in more than just a Playstation 3, IBM Supercomputers and Blade servers have used the Sony, IBM and Toshiba co-developed processor. There was also a Linux distro - YellowDog - that was built for Cell, specifically the PS3 even, back when the PS3 featured Linux support. The Playstation 2’s Emotion Engine was only used in the Playstation 2, that weird Playstation 2 TV box and the first-generation, 599 USD Playstation 3.(Was later removed to slash prices on the PS3 much to many people’s dismay)

Another reason is that perhaps the main emulator for the PS2 - PCSX2 is simply moving a lot slower than the RPCS3 crew and wait this isn’t a blog about Playstation Emulators, it’s about Persona 5.

Anyway RPCS3 is the leading emulator for PS3 and has even been a source of contention from Atlus themselves. RPCS3 has been a great way to play Persona 5 for a while now and that’s where I start. Setting up the emulator was pretty simple and dumping a copy of Persona 5 was something I did not do - I asked a friend of mine to dump his copy for me.(;) Release it on Nintendo Switch or PC Natively and you will deffo have a day 1 preorder from me, Atlus) 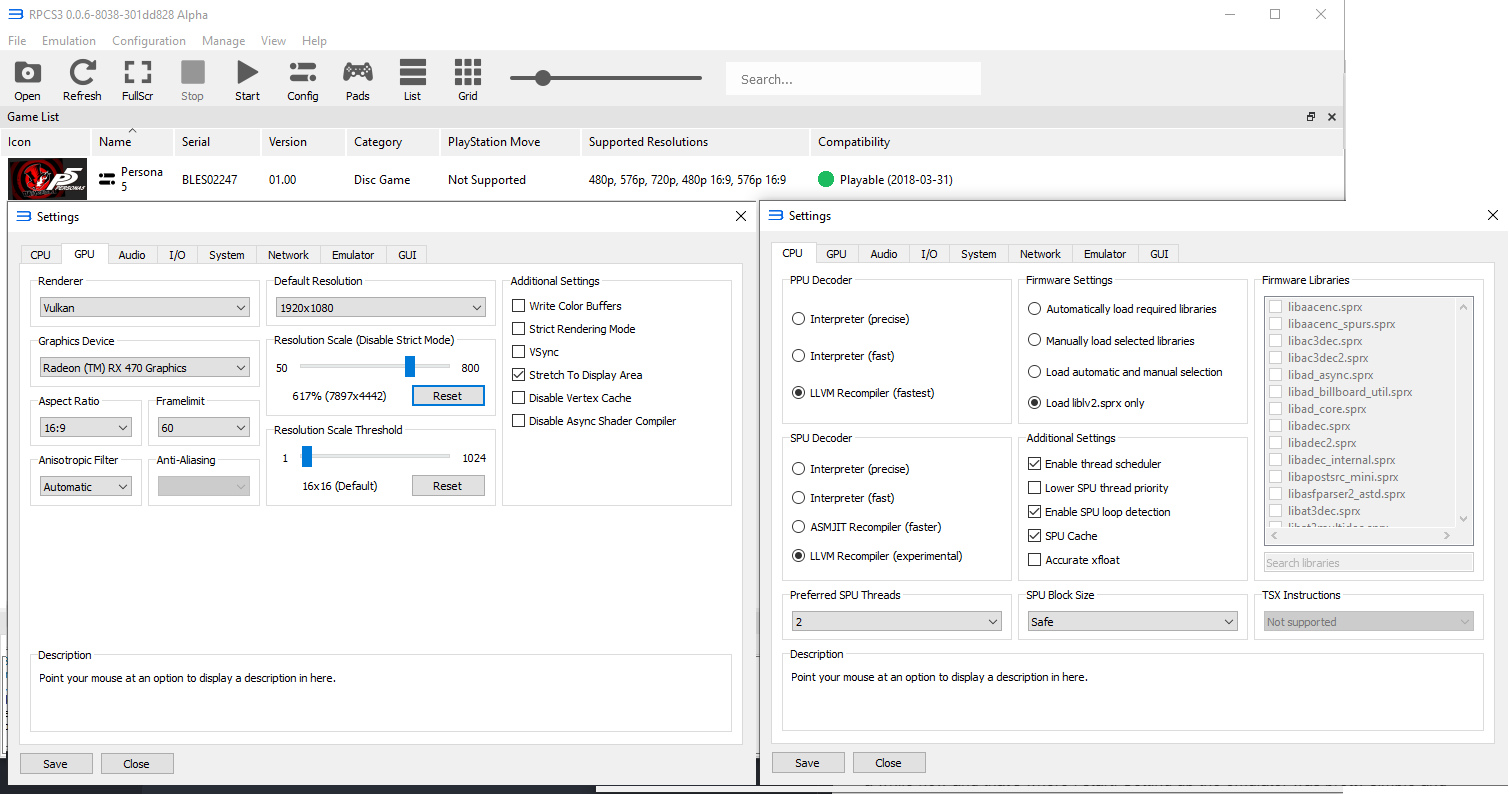 The game basically runs at 60 FPS for the most part, except in particularly crowded places, it drops to 30 FPS (By the way, 30FPS is the supported framerate of the PS3 when it come to Persona 5) and I believe this is mostly a bottleneck of my basically stock Ryzen R5 1600. (A new cpu cooler upgrade is in the horizon to get some serious overclocking going on.) and the strict rendering is enabled because of a bug with AMD hardware that causes a annoying line to display diagonally across the screen. The solution is to basically increase internal resolution to past 8K but that destroys my poor and modest RX470 GPU(Also an upgrade is in the horizon. I want to get a hold of a beefier card to do some hash cracking anyway).

Speaking of 8K resolution and stuff, if you decide to do this, you’re gonna find that the portraits are bugged. In order to fix this, you are going to have to install some mods and a modloader for Persona 5.

Here’s a succinct and simple tutorial

That said, these techinical issues does not distract from the fact that this game is insanely good. I’m currently on the fourth “dungeon” and I’ll talk about the game and the gameplay more in detail on the next post. This was basically an overview of the “technical” challanges I had to go through to get it working in the first place.

If you like what you see for some reason... you may donate! I would love any XRP you can spare!